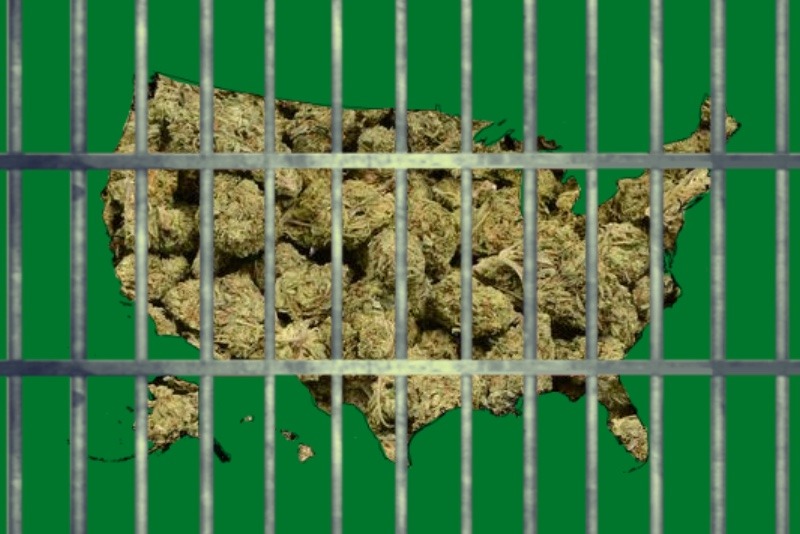 What are reparations and how do they relate to cannabis?

Smoking weed in America is something that is just now starting to become more and more favorable in the light of the law. For the longest time and still today, Marijuana has been classified as a schedule 1 drug. Marijuana for so many is a healing drug, physical pain, cancer and anxiety are just a few things that cannabis has proven to help treat and even cure, but for most marijuana can destroy lives. But not in the way you would think, rather than the drug possessing a threat to those who use it, the law that keeps that drug illegal is what actually causes the most harm. Mass incarceration, systemic racism and being displaced in the world with a criminal offense or a felony are some of the things that have resulted keeping marijuana illegal.

In 2020, we have seen the relationship between the government and the people for what really is, rocky and extremely fragile. For years the government has claimed to be making steps in justice and liberty for all Americans, yet the work done says otherwise. We have a system that caters to the rich over the poor, a system that works to put POC (people of color) in prison rather than in society and sadly a system that doesn’t value their lives either. This system rears its ugly head around especially in the area of drugs and narcotics.

With marijuana being legalized slowly throughout the United States, more and more states not only release their plans for taxation and how licenses work for marijuana growers and sellers, but also how to make amends for years of mis-justice to communities who were marginalized based on marijuana. States have worked out plans to release prisoners and expunge records that contain information related to possession of weed. But while that is great, that doesn’t give the person the years of their life back lost within the prison system. This also doesn’t guarantee they will have the resources needed to find employment or housing because the system, while changing and becoming better, is still against them.

In this post we will be looking at a few different things happening on the legality side of marijuana. Starting with states and how they have legalized or not legalized weed, what changes to the law and criminal records have been created in response to legalization and then lastly we’ll look at reparations and how they can help right some of the wrongs made by the government. 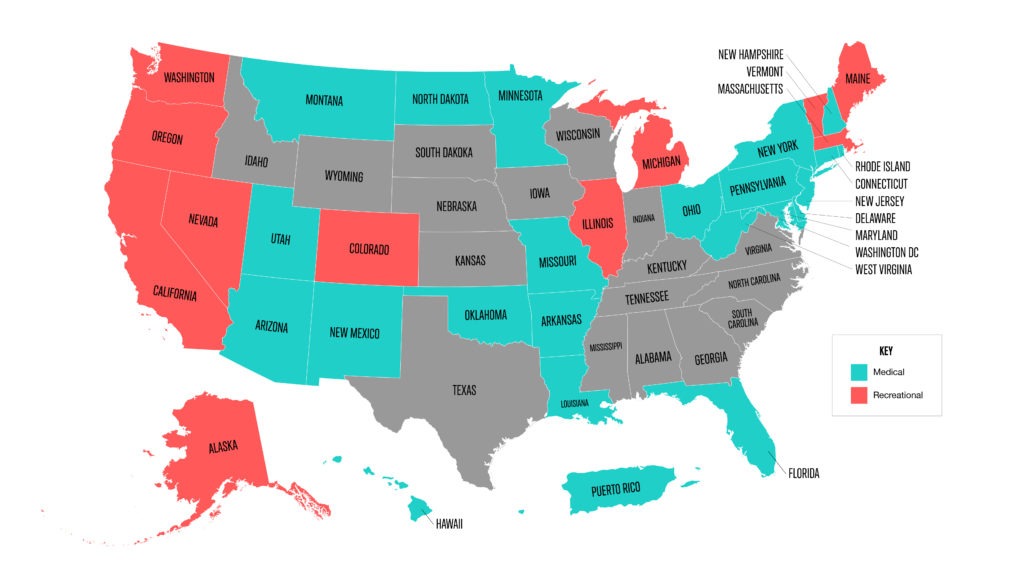 Seeing the map provided above has made me feel like an island here in Illinois. When you look at the map you can see many states are gray. Meaning they have neither made medical nor recreational marijuana legal to the citizens. The blue goes into what states have allowed medical treatment, which makes me hopeful. Most states that have recreational passed now started as medical only and after a few years and revenue checks they passed recreational. Lastly you have the red, which means both recreational and medical, living in Chicago I remember when they passed medical cannabis, in 2013 The Compassionate use of Medcial Cannabis Pilot Program Act which brought in some tight restrictions but nonetheless allowed people to smoke cannabis as a medical drug. In any case, I present this map of the USA’s allowance of marijuana. From this chart alone you can probably gather that marijuana at this point is not legalized federally but is legalized at a state by the state. From that though it is up to the state to work on and correct their past laws as is it relates to incarceration for cannabis.

The laws regarding marijuana have taken drastic changes over the years. This includes more than just the use of medical or recreational, it also involves the sentencing and prosecuting of people found with pot on or in their system. States have also begun to look into cases where someone was sentenced to jail time or is still in jail for possession of marijuana. This though is really only happening in states that have actually legalized it. As we know marijuana is not federally legal, therefore, the only states to truly release prisoners based on marijuana based charges are the states that have legalized it.

The example I have is this, in a state like Texas where weed isn’t legal, medically or recreationally if you have any amount under 2 ounces, you technically qualify for a class B misdemeanor. From there you can get from anywhere up to 180 days in jail and up to a $2,000 fine. Now compare that to a state like New York, where medical marijuana is legal if you are caught with under 2 ounces of weed it’s “no longer relevant” stated by the NYPD. In short, the way this country handles their marijuana policies and best interest in their people who want cannabis, is really fucked up. 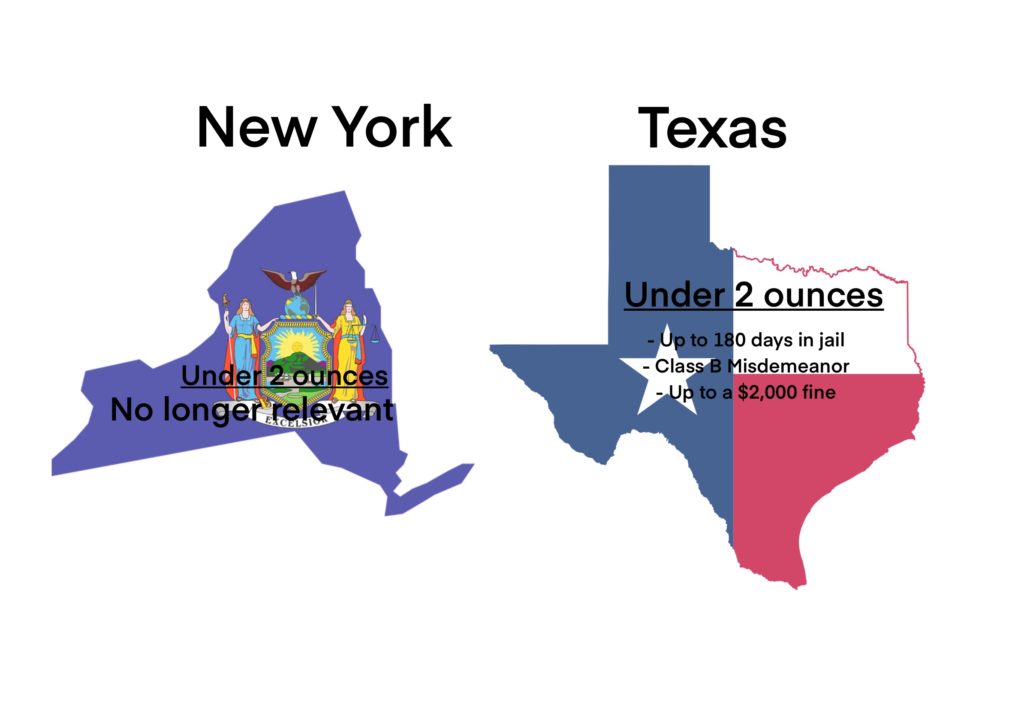 The hardest part about all this is that we are here in 2020 and while legalization has been happening throughout the country since 1996, we are now just being given the freedom to hold pot in some states and not get jail time. For those who have been put in jail, states are now slowly beginning to allow prisoners free based on marijuana possessions. In Illinois back in 2019, Governor Pritzker announced 11,000 sentence pardons for low level possessions of marijuana as reported by CBS News. That is one example of the government trying to right the wrongs made during the war on drugs. But it’s far from enough, according to Forbes, there are roughly 40,000 prisoners convicted of marijuana charges within our prison system. With less and fewer convictions and marijuana charges happening every year the question is, is releasing prisoners for chargers enough? Is there anyway we can give back to the people who have been wronged by the system that says it’ll protect them?

Where reparations come in

Now the word reparation means to give someone you have wronged either money or something in the form of forgiveness. Reparations when used within American politics generally refers to righting the wrong between African Americans and the government. We have seen the government try and fail at reparations in the past. When the Native Americans were given reserves and money, they were not given full control of the assets. Rather, the US government held the right to distribute the assets as they seem fit. In 2019 reparations were brought up during a congressional hearing for the first time in 10 years. Regardless, the US has thought about reparations related to slavery since slavery was finally declared over in Texas on the legendary Juneteenth day.

Now reparations in light of Marijuana legalization is something being discussed as states or cities figure out how they want to use the tax revenue. A suburb of Chicago, Evanston has decided to use the money generated from sales of marijuana to go towards reparations. According to Alderman Robbin Rue Simmons, “70% of all marijuana related arrests in Evanston were African American, even though only 17% of Evanston is African American”. Reported by ABC News, the article goes on to say that Evanston will give $25,000 towards any property purchase by an African American whose roots in Evanston were established between 1919-1969 or their direct descendants. This is all in response to Evanston’s pay gap between white and black residents. The idea is too close that starting at a property level, giving people the chance to own their property.

Injustices made towards people of color are something that can never truly be forgiven or taken away. The experience will live on with the person for a long time after it has happened. Within our country injustices are made constantly when it comes to cannabis. Some of the people most affected by it are POC and with that too they receive the worst punishments. Today America has made strides, the people of this country have made strides to right the wrongs made in the past and ensure everyone is given a fair chance in America. Reparations are one way the US is starting to give back after years of abuse and trial towards not only people who use marijuana but also POC. The struggle and battle for legalization of cannabis and rights for all is far from over, but learning and recognizing the flaws in society will help us push into a better tomorrow. One that is not necessarily free from flaw, but recognizes what flaws it has made and works to correct them for the sake of its people.

Avid smoker and graduate from the School of The Art Institute Chicago. Here to bring news and education to all the smokers out there.

Kromedome started as a way to bring simple, easy to use, premium electronic options for concentrate consumption.